Before the technology became the HairAnchor blend, it was tested in a 6-month clinical trial. The study was designed by a team of Dermatologists and Hair Scientists to be as rigorous as clinical trials for new medical treatments.

More than 300 men and women participated in the double-blinded, placebo-controlled, 6-month clinical study. Study participants used the treatment or a placebo throughout the study. Their progress was measured at 8 weeks, 16 weeks and 24 weeks to track the technology’s ability to reduce hair loss by lowering scalp oxidative stress and improving scalp condition. 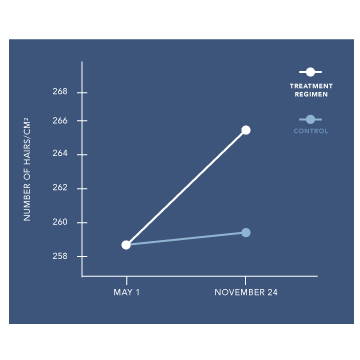 Not only was the treatment effect measured by the team of scientists and dermatologists, the results were noticed by those who used it. At the initial 8 week checkpoint, study subjects indicated they noticed less hair loss and fuller hair.

As a result, the HairAnchor blend became the essence behind our daily Anchoring Essence for the scalp - one for men and one for women. Then came the Keep It Anchored Pre-Cleanser, Shampoo, and Conditioner for use on wash days to bring out the best in your hair from purified scalp to soft & full ends.